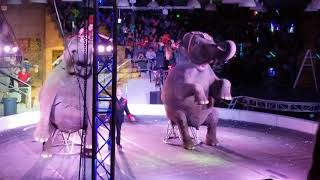 CWI recently obtained footage of Garden Bros Circus and were horrified by what we saw! The footage revealed "elephant trainer" Anthony Frisco repeatedly doing what many "trainers" keep hidden: he was repeatedly and aggressively hooking elephants Isa and Viola throughout their "performance". At times, the hook would even get stuck on the elephant prompting him to pull even harder. Numerous locations, including the states of New York, California, and Illinois, have all ended th

For the last three years, CompassionWorks International has produced the Worldwide Rally Against Trophy Hunting (WRATH), which coincides with the annual convention of Safari Club International (SCI). SCI is a group of trophy hunters that pat each other on the back for mercilessly killing animals for room decoration. You can read more about the 2018 WRATH event that took place last February by clicking here. Recently, SCI decided to feature us in their membership newsletter. D

Sadly, though Ringling stopped touring a year ago, circuses using animals persist and are traveling across the nation. CWI works diligently to ensure that as many of the performances are met with opposition and community education as possible. Jordan World Circus is one of the circuses currently performing with animals. They are using tigers, horses, camels, and two elephants named Carol and Patty. All of the animals involved deserve a better life than one of suffering insi

Speaking up for Billy at the LA Zoo

Recently CWI Executive Director Carrie LeBlanc was invited to speak at a rally for Billy the elephant held in front of the Los Angeles Zoo. For nearly three decades, Billy has languished at the LA Zoo, a "gift" from the Malaysian government. Efforts to remove Billy to a suitable sanctuary have been ongoing, but there is renewed energy behind the effort thanks to the Elephant Guardians of Los Angeles. CWI was pleased to help them organize their first-ever demonstration for B