SCI Stoops to Fundraising Off of the Good Work of Activists

Trophy hunters are so terrified of activists that they are now fundraising off of successful efforts to expose them for what they are: weak-minded, blood thirsty ego maniacs who think that wildlife exists for people to USE. How low can they go? Read the entire letter here: Ready to cancel out the donation of a trophy hunter? Support CWI today and the work we do to reveal the truth about trophy hunters and their vile and reprehensible killing of innocent animals. Click here to

On Saturday, February 23rd, CWI, in partnership with numerous animal rights organizations, will stage a protest at the debut of Professional Bull Riders Iron Cowboy being held at the Staples Center in Los Angeles. Click here for more information on the protest or email us for more info if you are not on Facebook. In conjunction with this event, and due to activist demand, we have also created posters appropriate for PBR demonstrations. While we have not had them printed in bu

Taking on Trophy Hunters Around the World

On January 12th, CWI produced the 4th annual Worldwide Rally Against Trophy Hunting (WRATH), an annual event that coincides with the annual conference of Safari Club International, a group of trophy hunters who kill animals for fun, bragging rights, and gold stars from SCI. The conference was held in Reno, NV where CWI gathered more than 50 caring animal advocates to speak out against trophy hunting. Less than a half mile from the convention, CWI mounted a billboard that not

While we were busy protesting around the world against trophy hunting, CWI also shared a message of kindness on the Las Vegas Strip with our vegan-themed mobile billboard! We are grateful to VegFund for providing the funding for this important run of the A Kind World billboard, which reached an extra 100,000 people thanks to the massive Consumer Electronics Show that was taking place in Las Vegas during the same period! Ready to learn more about living kindly? Visit our site 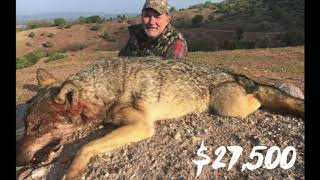 Do you know what takes place at the Safari Club International annual convention? In addition to learning about gruesome topics like "preparing your trophy room", the blood-thirsty ego maniacs at SCI bid to kill hundreds of animals. Take a brief stroll through the lunacy: Be a part of the solution. Join our Worldwide Rally Against Trophy Hunting! More info: notyourtrophy.org.

Our Mid Year Report is Here

We are 2 for 2 in tiger magic show takedowns this year!

CWI's Vegas VegFest is ON!

Our 3rd Annual Las Vegan Potluck & Picnic was a Blast!

Our Mid Year Report is Here

We are 2 for 2 in tiger magic show takedowns this year!

CWI's Vegas VegFest is ON!

Our 3rd Annual Las Vegan Potluck & Picnic was a Blast!